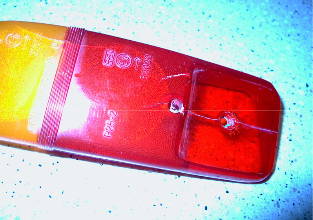 First, wash the lens using a tooth brush to get into all the cracks and crevices then polish it to find
all the cracks and if there are missing parts. Some of the cracks will be missing chips and parts of
the lens. Second step , finding all the parts and gluing them back in place is the next step.
Remember that you will be making a mold of both sides of the lens so making a repair on the front
can show up in the finished casting if an equal amount of work can be done on the inside of the
lens. The Topolino lens has defusing lines on the inside so making any repairs will be almost
impossible; causing more harm than good.

These lenses had cracks and grind marks on the outside but with sanding and polishing most of those were removed. However, most of the chips and the stem were found in the box of parts that came with the vehicle. One of the lenses had a hole punched into it and another was missing a screw stem. Make sure to wash the lens and any parts that are going to be gluing back together. Fitting them in place before gluing will help to get them in right the first time. 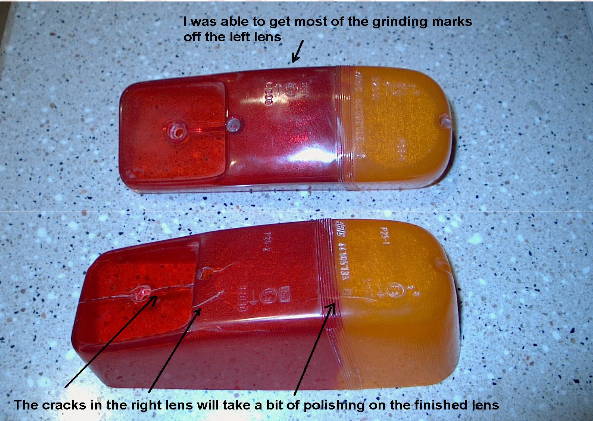 Cracks showing all the way through and a missing screw stem are problems that had to be addressed
and even then there were missing chips. 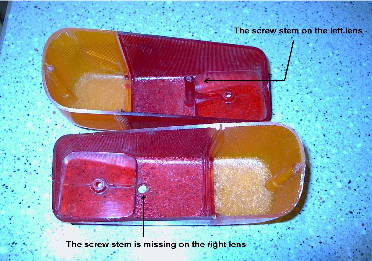 Using some SEM automotive plastic Bumper Repair (part # 68422) accomplishes the task. Pay attention to making sure it’s in the correct position and glue it first before filling the gaps with the SEM-bumper repair. The product is epoxy so some scratching preparation is necessary to make sure it sticks to the plastic lens. 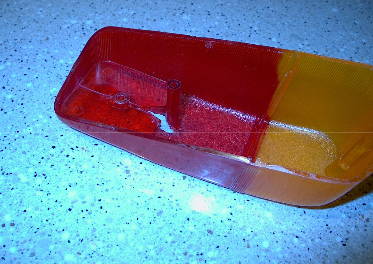 There was a hole punched into the lens. Most of the chips were found in the lens so gluing it back together was a quicker fix than trying to put all the defusing marks back into the lens hole area, but part of the crack was pushed inward. Using a length of wood inside between the two sides of the lens allowed enough pressure to keep it in place while gluing. Then SEM Bumper Repair was applied, sanded and buffed to a shine. All the cracks are sanded three times, once with 320 grit, then with 400 grit and finish this prep with 1000 grit wet dry sand paper. Then, all the surfaces were buffed to give them the necessary shine. Once satisfied with the surface of the lens; go to the molding process. 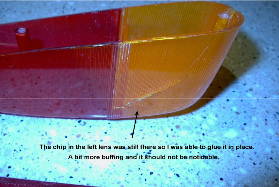 Step 6 Secure the lens in the mold

Here we used the Alumilite High Strength 2 silicone rubber to make the mold. The lens was placed face down using Alumilite synthetic clay on the inside making sure to cover all the holes and other ways for silicone rubber to find its way into the inside of the lens. A bed of clay was rolled thin to make it fill the bottom of the mold box and the lens placed on a 3/8" high border (between the edge of the lens and the clay bed) as the red screw stem is longer than the sides of the lens. So that when the second half of the mold is poured it won’t come up short. We used tape to cover the edges to be hot glued when spraying Alumilite UMR. 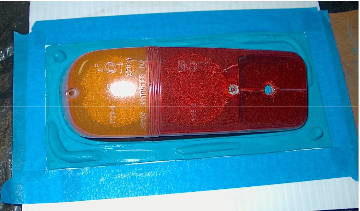 Here the top part of the lens mold is completed and still in the mold box. The box was made about ¾" taller than needed so that when the mold cured the bottom was removed as was the clay and a knife is used to cut along the sides between the silicone rubber and the mold box. Then the mold is pushed down to make room for the second part of the mold. (CAUTION: the mold box is not cut open.) Note that the sides of the mold are back a small amount, this was done to allow some widening of the mold to get a thicker casting at the joining point. This is because THIS lens and most automotive lenses have defusing lines that dig deep into the lens, making them very thin. Widening them makes
them stronger and they will cure stiffer. 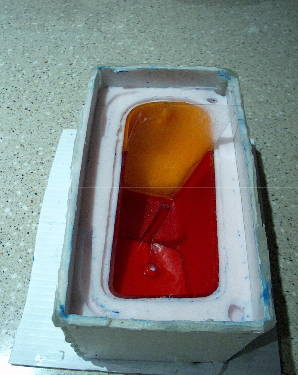 Step 8 Cut along the edges

Before the lens was clayed up for the mold, a piece of polystyrene is cut to fit along the line on which to cut the male side of the mold into two parts. This will allow two colors to be made. The polystyrene is cut from packaging material, normally found holding most items in stores. Earphones, tools and toys all have some type of clear packaging and the backside is smooth. The polystyrene will stick to the silicone mold material so a good coating of mold release or Vaseline (used here) to cover it will allow it to slip out and indicate a line to cut along.

This lens had a piece of metal that acted as a dam between the lights so it was easy to cut and place it in. Other lenses may not have these, so a different method is needed to place the polystyrene piece so that it will serve as a cut line for the two halves of the male side of the mold. It may even have to be spot-glued in place. The following picture shows how the piece of polystyrene is sticking out of the mold. Use a sharp knife to cut along the edges of the mold. CAUTION! Do not cut the mold box open as you will need the mold box later in the process. 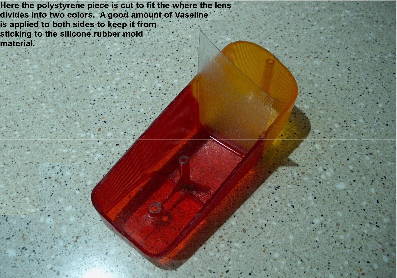 Step 9 Remove the styrene and cut

Here the styrene piece slips out easily from the mold, although there may need to be a slight wiggling and tugging involved it will come out. Then cut along the line made by the styrene piece to make two male mold parts. See next slide picture #9b. 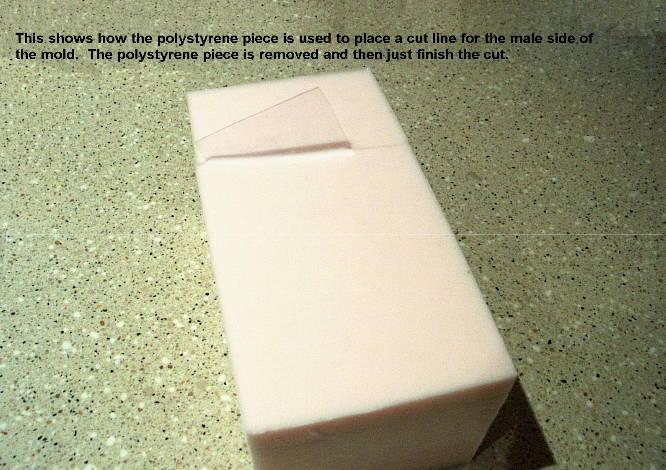 The picture below shows the two halves of the male side of the mold allowing two colors to be made
in one lens. The screw stem had to be shortened as it will curl over and mess up the casting. 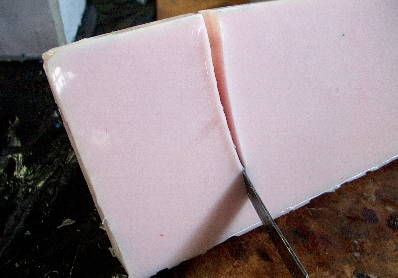 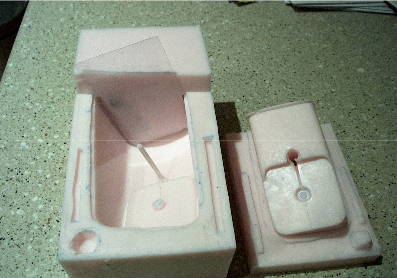 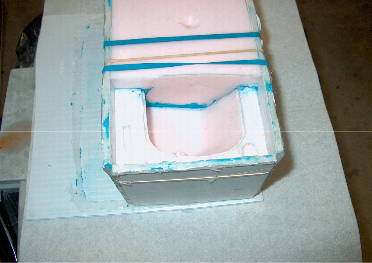 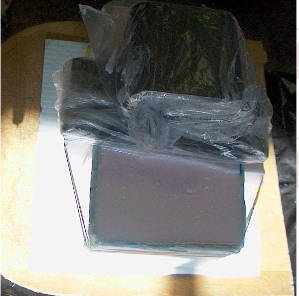 After the mold has cured, pull the mold box off without cutting it open. This may take some cutting along the sides of the silicone rubber to release it from the mold box but it will lift off. 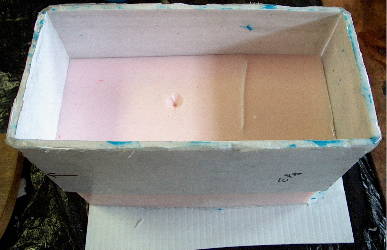 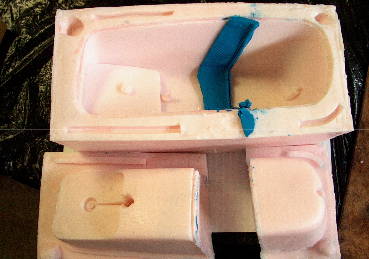 With the block mold (amber side of the mold) in place the mold is ready to cast. The mold is 5.4 lbs.
and preheated for 2.5 minutes in the microwave (the microwave unit I use is performing at high heat)
to obtain the necessary heat. Then put a 1 lb. piece of weighted material on the block mold to give
some added pressure to keep the resin from moving into that part of the mold. 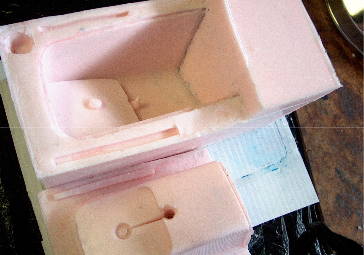